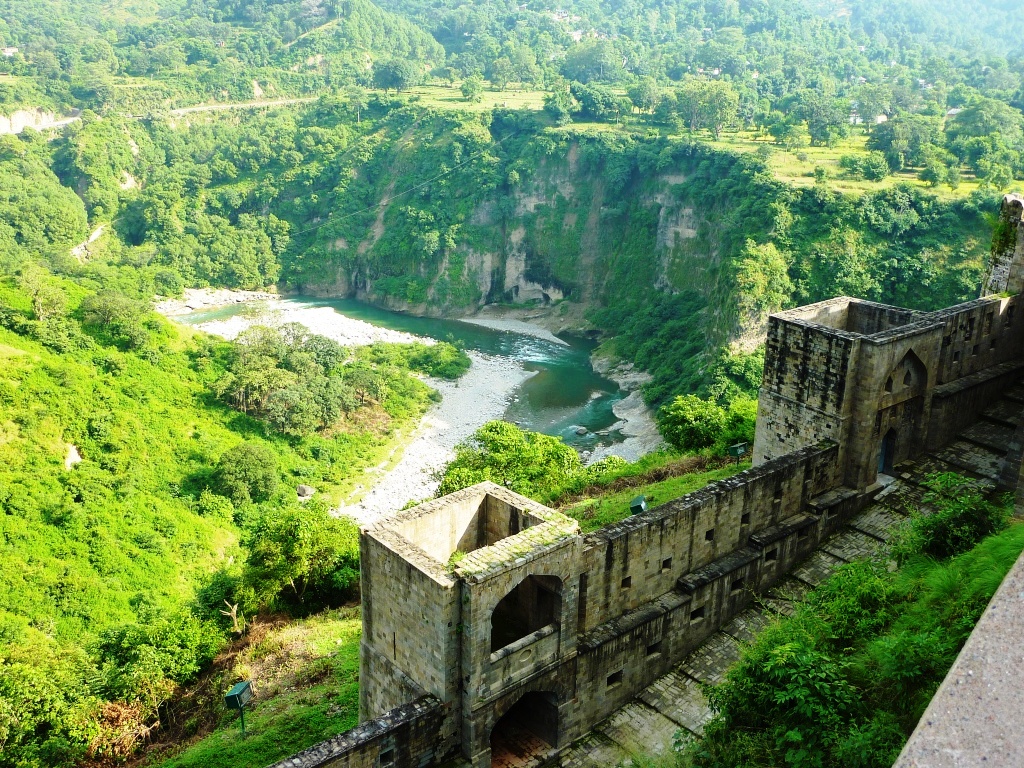 The famous Kangra fort in the lap of the Himalaya overlooking the vast expanse of the plains,is located at theKangra Fort confluence of the rivers Bangana and Manjhi,in the Kangra town of Himachal Pradesh.The natural surroundings add to the safety and security of the fort.The fort is nearly 92m in height and covers an area of about 5 sq km.The construction started in 470 A.D. by the Katoch rulers but further construction activities of various portions took place in subsequent periods. The fort became vibrant with

activity from 1009 A.D. when it was occupied by Mohammad Gaznavi.It was captured by the Rajas of Delhi in 1043 A.D. and remained under them for three centuries.It came under Hindu and Mohammaden occupation alternately during a period of 200 years.Ultimately it was taken over by Akbar,the Great,in 1556 and remained with the Mughals till 1783.Thereafter,the Gorkhas under the leadership of Sansar Chand occupied it.Maharaja Ranjeet Singh of Lahore captured the fort from the Gorkhas and the Sikhs held it for 34 years until it came under British control in 1846.

As the fort remained under the control of various rulers different architectural patterns are noticed,although the architecture of the 9-10th centuries is more prominent.A temple with the image of Adinath bears the writing in stone ‘the year 1446’.A beautifully carved image of sun is also seen on the walls.Mughal architecture is evident in the arches and domes. The fort is founded on bedrock comprising a well-cemented and compact boulder-conglomerate of the Upper Siwalik age.Open drains had been provided for surface runoff.Lintels,mehrab(arch) and domes are constructed Kangra Fortover vertical walls of sandstone slabs with thin mortar.Lime mortar of about 1.5 m thickness has been used. Slabs of Middle Siwalik sandstone were originally used for construction. Later bricks and blocks of quartzite were used for restoration work.

Exposures of Middle Siwalik sandstone are seen about 10 km from the fort. The soft sandstone has provided good workability but it has been subjected to easy decay by natural processes. The fort is in a partially damaged state due to weathering of the stone masonry blocks and destroyed, to some extent, by the earthquake of 1905.