its credit. Moreover it is hopedAurangabad that there will be good addition of two more in near future. Barring these heritage monuments of Ajanta, Ellora, Daulatabad and Bibi-Ka-Maqbara the district is rich in monuments, historical and religious, of National importance.

Hence, it deserves the epithet as Tourist District of India. Realizing its International Status the erstwhile central Minister for Tourism and Culture rightly praised the tremendous tourism potentiality of this district in one of the International Press- Met. (Mayami U.S.A. Press Meet).

By and large the Foreign tourists visit India to see the beauty of “Taj” the dream in marble, to experience the world of Lord-Budha and to speak to the colors sculptures of Ellora- Ajanta and Ellora are the creations of the dedicated artists of the by-gone days of this region.

Besides the groups of the heritage caves there are large number of caves of equisite beauty at Pitalkhora, the earliest rock-cut-temples of Western India, at Ghototkacha in the panoramic gourge of Jajla hills and at Aurangabad the sculptural beauty of which is unmatched, on the periphery of the city itself.

Besides these cave temples the district is handsomely adorned other heritage objects such as, the ancient city of Pratisthan ( Paithan) famous for exuberant Paithani sarees, the abode and saint Eknath and also known for the wood-work of the Peshwa period, Elopur the house of Ghrushneswara one of the twelve Jyotirlingas of India and also the ” Gadhi” of the Bhosales, the ancestors of Chhatrapati the architect of Hindavi Rajya, the impregnable fort of Devgiri- Daulatabad , Khultabad the seat of the Sufis and the Roza of the Aurangzeb in the midst his close relatives Aurangabadand preceptor.

Besides these there are large number of historical manora and mansions, tombs and maqbaras, Hammamas and gardens, temples and monastores.

Prominent among them are Bibi-ka-Maqbara, the tomb of Rabia-Ud Baurchi alias Dilres-Banu- Begam the wife of Aurangzeb also known as Mini Taj, Soneri-Mahal, the Haveli constructed by Pahadsing a noble of orchha, Navkhanda palace, erected by Malik Ambar the prime-minister of Nizamshahi of Ahmednagar who enhanced the status of the city from Khadki a small hamlet to Fateh-Nagar the then capital of Nizamshahi Kingdom, Kile Arq the palace of Aurangzeb, the 52 towering gates interspersed in the fortification wall of the city mainly constructed by Aurangzeb during his over-stay in the Deccan, Pan-Chakki, the water-mill constructed by a sufi-saint a marvel Feet in hydrology.

The District of Aurangabad has over the centuries become a meeting place of life styles as it is centrally located on the map of India. It has witnessed the rise and fall of many dynastic such as the Setavachanas, the Vaustokas, the Chalukyas, the Rastrakutas, the Yadavs spanning fifteen centuries till the advent of Muslim rule at the very end of the thirteenth century.

The district has a long and undeterred history since the Jatava-period to the present day. During the early phase of ancient period it was governed by number of tribes. This tribal units were united during the prolonged rule of the Satevahana or Shalivahana (230 B.C. to 230 A.D). The sober history of this region begins with” Satavahanas”. Their rule witnessed the era of peace and prosperity and hence the district of Aurangabad then centered around Pratishthan the capital of the Satvahanas for centuries together, became the hub of socio-cultural activities of the Deccan. TheAurangabad Satvahanas gave incentive to trade and commerce and monopolised the Greeco-Roman markets as far textile goods namely Paithani the high-class silken sarees of Paithan is concerned. Besides to textile they established hegemony in the trade of spice ‘ curirs’-ivory etc.

Out of which they accrued huge profits which is evident through the material remains of their period Day scattered all over Western India including Maharashtra as they were the lords of the territory between Narmada to Cavery.

In the intervening years the region began to flourish as it was situated on the earvan routes introduced by the Satvahanas long-back . The capital Prastishan was linked with the above routes, along with ports and harbors on one hand and Land-emporeas like Sarsvati, Patliputra, Avanti, Takshashila etc. on the other. During the early centuries of the Christian ere the regions of the commercial were in the hands of Buddhist community hence large number of Buddhist caves were excavated along these trade routes i.e. ancient ” Sarthavaha” Path- Later on Jain and Brahmanical caves were also excavated on par with Buddhist caves- Ellora is the best example of the caves of all the above mentioned faiths. 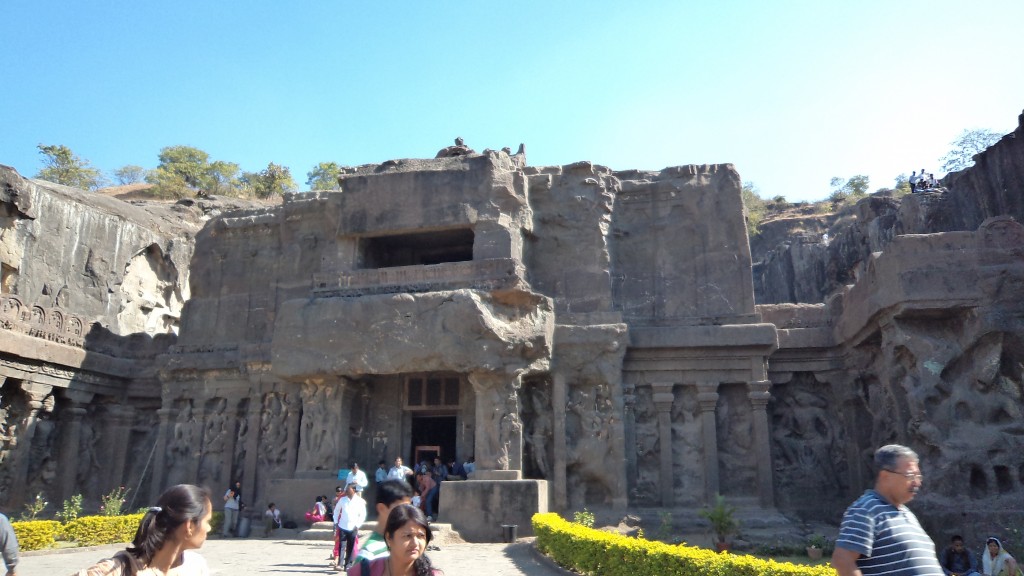 How To Reach Aurangabad by Air: Aurangabad airport is conveniently located 10km from the city and has direct flights to and from Delhi and Mumbai.

How to Reach Aurangabad by Rail: Aurangabad is well connected to Mumbai and other cities. There are two trains that depart daily from Mumbai, the Tapovan Express and the Devgiri Express is an overnight train.

How to Reach Aurangabad by Road: There are several luxury and state run bus services that ply between Mumbai andAurangabad Aurangabad and the Ajanta/Ellora Caves

Shopping in Aurangabad is fascinating as the region is rich in the art and culture of several communities. Aurangabad is known for:

Fabric -The beauty of Paithani silk sarees is legendary .So also the beautifully woven silk Himru and Mashru shawls, of which Himru is an age-old weaving craft of Aurangabad with a blending of cotton and silk. which gives a feel of satin.

Silver– Aurangabad is also known for its bidriware, the intricate silver inlay craft which was once patronized by the Mughals.

Semi-precious stones- One can find a wide display of jewellery made of semiprecious stones and decorative pieces in Auranagabad.Agate in particular is available in a variety of forms and shades.

Old Coins- Aurangabad is the place to look for old coins dating back to the Mughal period.

Ajanta Caves: 106km from Aurangabad. The 30 rock-cut Buddhist caves at Ajanta are of two basic designs called ‘Chaitya grihas’ and ‘Viharas’. Five of the caves….Aurangabad

Ellora: The world-heritage listed cave temple of Ellora, about 30km from Aurangabad, are the culmination of Deccan rock-cut architecture. There are 34 ca…

Aurangabad Caves: Lies 3 km north of Aurangabad. They were excavated out of a south facing hill side overlooking the town. These caves fall into two groups about 1….

Bibi Ka Maqbara: It was built around 1657-1661, by the last of the six great Mughal Emperors, Aurangazeb, for his wife, Rabia Durrani.