Gurdaspur, which is a border district of the state, has played a significant role in the defense of the country. The history of Gurdaspur bears many expressions. It has a tinge of medieval India, volumes of early Sikh history, mughal invasions, mughal empires, history of local people, religion, places and above all history of people migrated from all parts of the country who adapted to local environment and belonged there. Gurdaspur being a geographical link to the heavenly kingdoms of Kashmir, and beyond, conceals within the history of unknown soldiers and their families which settled there, history of the oppressed people who later became united to fight against to what they perceived the larger evil by that time and were called Sikhs, some old buildings and few faint reminders of English Raj, remains of an ancient India and above all history of a river which became two, Ravi & Beas, and gave road to the habitat which was later known as Gurdaspur–The land of the Master(the guru) and the disciple(das), the land of oneness. And of course, with all this it carries a living history of all cultures which

metamorphosed into one, the culture against other areas of the country, the matchless culture 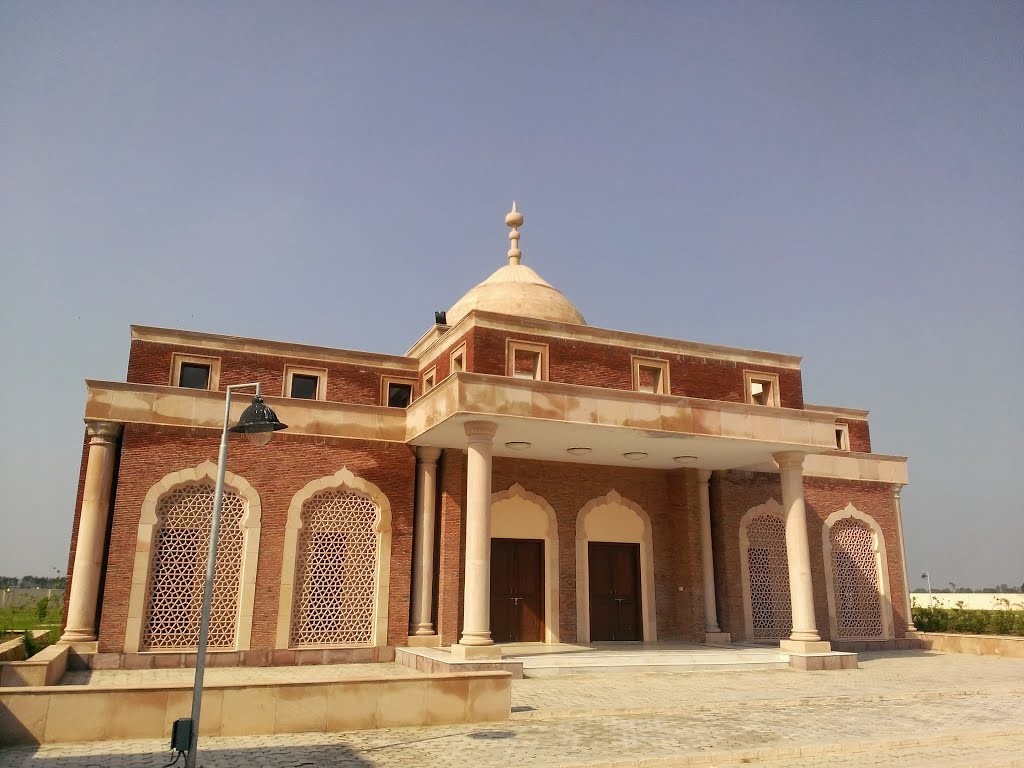 of Gurdaspur. Batala and Dhariwal are important industrial centers known respectively for the manufacture of machine tools and woolen products. Dera Baba Nanak and Sri Hagobindpur have great religious sanctity and Pathankot – a great tourist transit center has a number of picnic spots nearby. Other towns which has historical importance are Places of Interest.

Marriage of Baba Ji at Batala

Guru Nanak Dev Ji was married in Batala to Bibi Sulakhani and a big annual fair is held to commemorate the marriage. Gurudwara Dera

Sahib and Kandh Sahib built on the spots where marriage rites were performed attract pilgrims from all over the state.

Pandori Mahantan is situated 8 Kms east of Gurdaspur city. It is an old Dera (monastery) of Mahants, the management of which has passed from Guru (preceptor) to his chela (disciple) for generations. The monastery was founded sometime in the reign of Emperor Jahangir (1605-1627) by a famous of Hindu saint Bairagi Bhagwanji.

Punjab is famous for its Baisakhi fair Baisakhi is observed at many places in the state. Pandori Mahantan is one such place. It is not known since when the Baisakhi fair at Pandori Mahantan is being celebrated. Some suggest that the fair was first held when Baba Narainji succeeded his Guru Baba Bhagwanji about four centuries ago and has been held every year since then. The fair lasts for three days from Ist to 3rd Baisakh, corresponding from 13th to 15th April.

Babehali is situated 4 Kms from Gurdaspur city. A Chhinjh Mela is held here every year in the last week of August. Wrestlers from India and abroad participate in this Mela. Cultural programmes are also held here by various artists from all over Punjab.

Kalanaur, a historical town of Gurdaspur District, is situated towards the west of Gurdaspur at a distance of 25 Kilometres. Akbar the great, the famous Mughal Emperor was coronated at a raised platform, 2 Kilometers east of Kalanaur on 14th February 1556 AD. Since time immemorial, a big Shivratri fair is held every year in the Mahakaleshwar temple on Shivratri day when a large number of devotees

gather here to celebrate the festival of Shivratri.

Some Important Places of Interest:

How to Reach Madhopur falls on the Delhi-Jammu railway line and important trains which stop here include Jammu Mail and Chennai Mail.

There is a vast network of bus services of Punjab, Himachal, Haryana, Pepsu, Chandigarh, J&K and apart from private operators. Important destinations include Shimla, Chandigarh, Jammu, Dharamshala, Dalhousie and Amritsar.