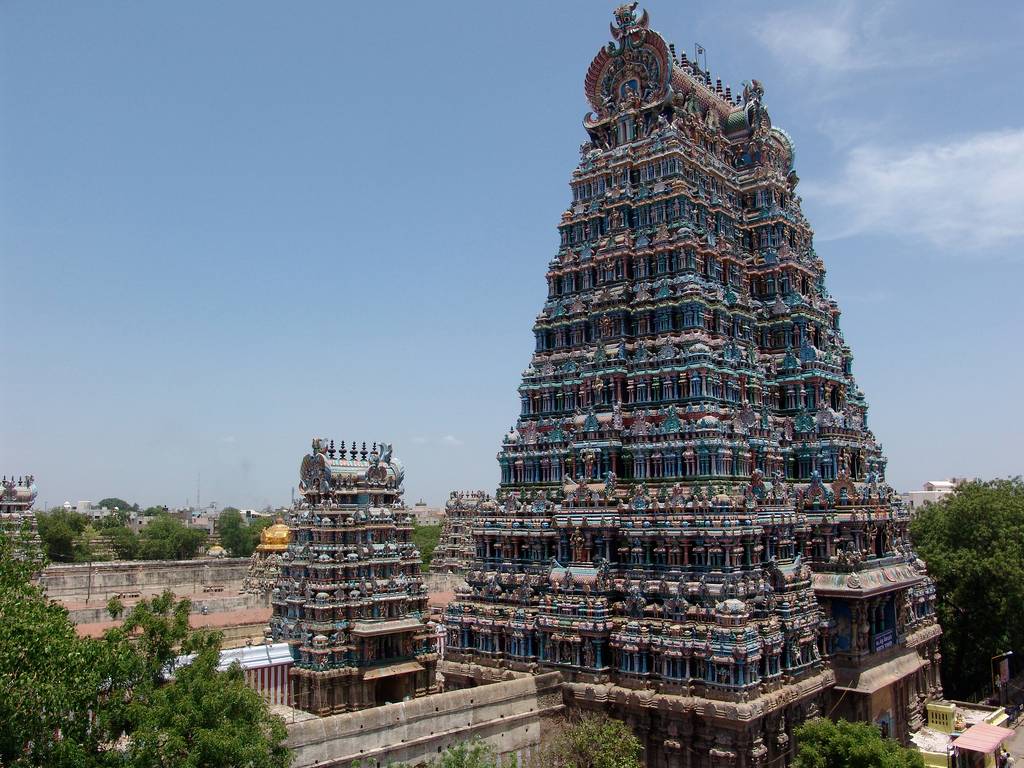 The enormous temple complex is dedicated to Shiva, known here as Sundareshvara and his consort Parvati or Meenakshi. The original temple was built by Kulasekara Pandya, but the entire credit for making the temple as Meenakshi Templessplendid as it is today goes to the Nayaks. The Nayaks ruled Madurai from the 16th to the 18th century and left a majestic imprint of their rule in the Meenakshi – Sundareswarar Temple.

The temple complex is within a high-walled enclosure, at the core of which are the two sanctums for meenakshi and Sundareshwara, surrounded by a number of smaller shrines and grand pillared halls. Especially impressive are the 12 gopuras. Their soaring towers rise from solid granite bases,

and are covered with stucco figures of dieties, mythical animals and monsters painted in vivid colours.

Temple Towers: There are 12 temple towers(Gopurams). The outer towers are the landmarks of Madurai. They are:

North Tower (Nine Storeys). Height 160’6″. This Tower has lesser figures of sudhai than other outer towers.

Gopura: Pyramidal gates (gopuras) rise to a height of more than 50m. These towering gateways indicate the entrance to the Meenakshi Templestemple complex at the four cardinal points, while lesser gopuras lead to the sanctums of the main dieties.

Stucco Work: The figures of dieties on the tower are repaired, repainted and ritually reconsecrated every 12 years.

Ashta Shakthi Mandapam: A visitor who enters the temple through the eastern gateway, first enters this Mandapam (Hall). It was built by Thirumalai Nayakar’s wives Rudrapathi Ammal and Tholimamai. In this hall food was once distributed to the devotees who came from far off places. Next to this hall is the Meenakshi Nayaka Mandapa, a spacious columned hall used for shops and stores. This hall has a votive lamp-holder with 1,008 lamps, which are lit on festive occasions and present a spectacular sight. The sculptures on the pillars here relate some of Lord Shiva’s Thiruvilayadals (miracles) and also the story of Meenakshi’s birth and her life as the princess of Madurai.

The story descripted on the stones is as follows: Malayadwaja Pandya, a king of Madurai , was childless for a long time. He performed a number of yagnas (sacrifices made before a sacred fire) because he wanted an heir to his throne. On one occasion, a three-year-old girl came out of the fire and Malayadwaja adopted her. But the girl had three breasts and this worried Malayadwaja. However, a divine voice assured

him that the third breast would disappear as soon as she met her consort. The girl grew into a brave and beautiful princess. she won many battles, but eventually lost her heart to Lord Shiva, when she met him on the battle-field in Kailas. As soon as she saw him, her third breast disappeared and she recognized her divine consort, for the princess was none other than Shiva’s wife, Parvathi. After ruling over the Pandya kingdom for a while, they settled in the Madurai temple as Meenakshi and Sundareswarar.

Meenakshi Nayakkar Mandapam: This big hall is adjacent to Ashta Shakthi Mandapam, consisting of 110 pillars carrying the figures of a peculiar animal with a lion’s body, and an elephant’s head called Yalli.

Potramaraikulam (golden lotus tank): This temple tank is an ancient tank where devotees take bath in the holy water. The area around this tank was the meeting place of the TamilSangam – the ancient academy of poets. The history of the sangam goes back to the days when gods dallied with men. This academy judged the worth of any work of literature presented before it by throwing it into the tank. Only those that did not sink were considered worthy of attention. The tank is surrounded by a pillared corridor. Steps lead down to the tank, enabling worshippers to take bathe in it.

Oonjal Mandapam: The Oonjal (swing) Mandapam and Killikoontu (parrot cage) Mandapam are on the western side of the tank. Every Friday, the golden idols of Meenakshi and Sundareswarar are seated on the swing in the Oonjal Mandapam and hymns are sung as the deities gaily swing to and fro. The parrots in the Kilikoontu Mandapam have been trained to repeat Meenakshi’s name. But more interesting are the 28 pillars of the mandapam which exhibit some excellent Sculptures of figures from Hindu mythology.

Swami Sundareswarar Shrine: Lord Sundareswarar (Shiva) the consort of Goddess Meenakshi is to the north of Kilikoontu Mandapam . On your way you can worship a gigantic idol of Sri Ganesh called Mukkurini Pillaiyar. When the king Thirumalai Nayakar excavated a temple tank 3 km from Meenakshi temple he unearthed this idol of Vinayaka and erected the same here.

In the outer pragaram (corridor outside the main shrine) there is stump of the kadamba tree, which is said to be a part of the same tree under which Indra worshipped Shiva linga. Also in the outer corridor there are the Kadambathadi Mandapam and big hall called ‘Velli Ambalam’. Here, an idol of Nataraja (Shiva as the Lord of Dance) is seen. This idol of Nataraja is covered with silver leaves. Hence this hall is named as Velli Ambalam (Silver Hall).

The Thousand Pillar Mandapam: It is the ‘wonder of the palace’. Actually the number of pillars count to 985 beautifully decorated columns. Each pillar is sculptured and is a monument of the Dravidan sculpture. There is a Temple Art Museum in this 1000 pillars hall where you can see icons, photographs, drawings, etc., exhibiting the 1200 years old history. There are so many other smaller and bigger mandapams in the temple.

Just outside this mandapam, towards the west, are the Musical Pillars. Each pillar when stuck, produces a different musical note. The kalyana mandapa, to the south of the pillared hall, is where the marriage of Shiva and Parvati is celebrated every year during the Chitirai Festival in mid- April.

Vasantha Mandapam: This mandapam was built by Thirumalai Nayakkar. Vasanthosavam – the Spring festival-is celebrated in this mandapam in Vaikasi (April/May). Its pillars contain elaborate sculptures of Shiva, Meenakshi, scenes from their wedding as well as the figures of ten of the Nayak Kings and their consorts. This is also called Pudhu Mandapam. 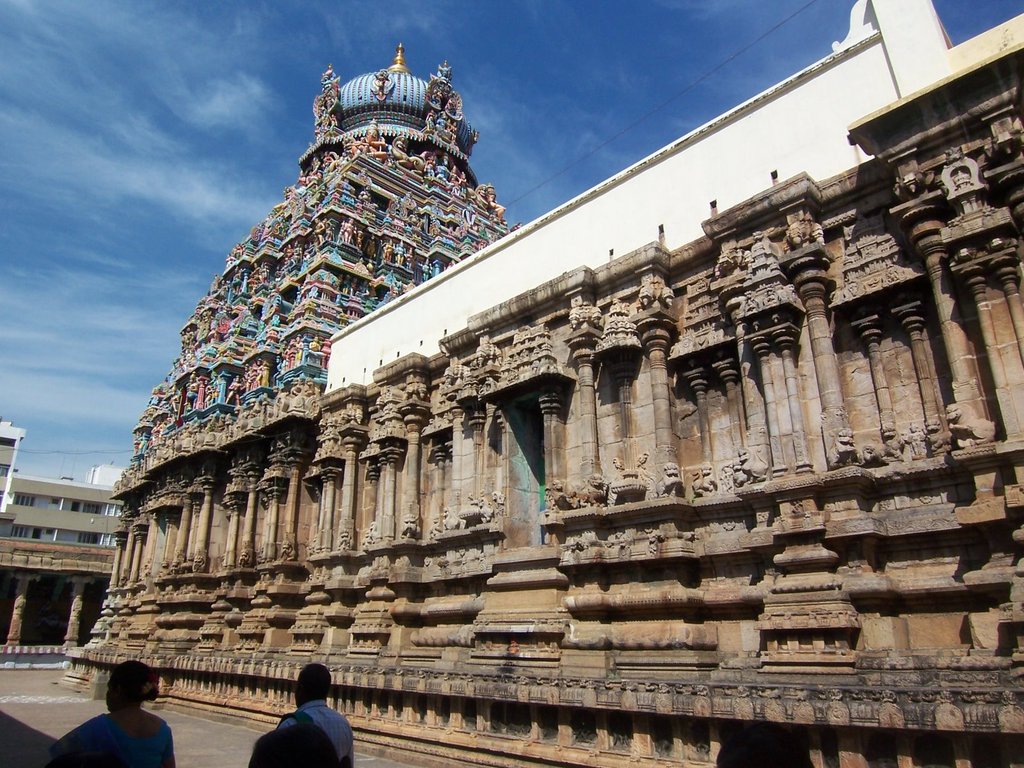