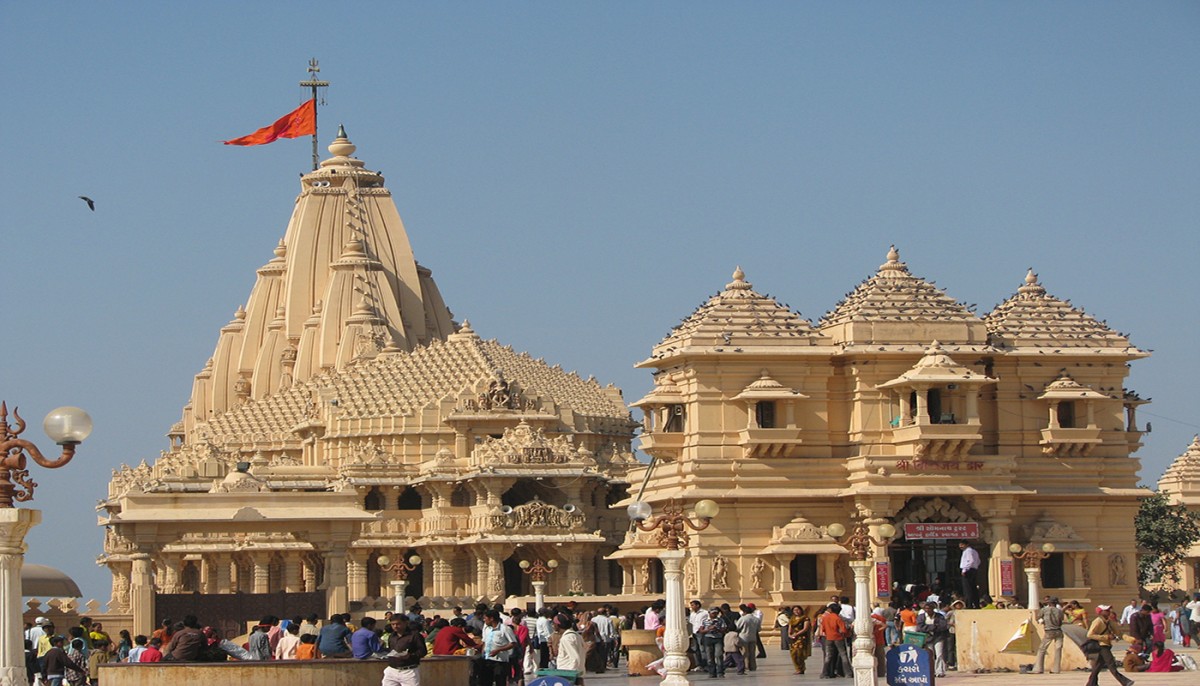 Rendezvous With The Legendary Gujarat

The streak of spirituality and the saga of salvation contours the coastal state of Gujarat, which has mellowed civilizations since 2500 BC. Laced with the legend of Lord Krishna, one of the most beloved deities of the Hindu pantheon, the land is redolent with the aura of Ahimsa – the focal point of Jain philosophy and their shrines continue to shadow the landscape of Gujarat. At places, the vestiges of Buddhist glory have withstood the ravages of time and that have added to the incredible marks left behind by the different imperial dynasties that crisscrossed

the political history of Gujarat.

The boarding point is Ashram Road in Ahmedabad and after skirting 216kms of the central hills of the Kathiawar Peninsula we reach Rajkot, a fast developing town, which was formerly the capital of a Rajput princely state. The place is best known as the early home of Gandhiji where he studied at Alfred High School. Another point of interest is Watson Museum, noted for its colonial collection and Indus Valley exhibits.

Jamnagar Ninety-two kilometers northwest from Rajkot is Jamnagar, our next destination that is reached through Paddhari and Dhrol after crossing River Nagmati. Jamnagar was once the popular pearl fishing town and the capital of Saurashtra Darshanthe Jadeja Rajputs. Here one can enjoy watching the flamingos in the backdrop of Ranmal Lake that was the nucleus of the old town. Adjacent to this lake is the famous Lakhota Fort and a museum with its Kotha bastion extending into the lake. The cremation ground of this city is very attractive, with a plethora of beautiful statues of saints and sages depicting religious episodes. The city is noted for its Ayurvedic College and Research Centre.

Winding through the countryside and some straight driving leads us to Dwarka. It is evening and the best thing to do is to watch the Sun’s last yawn of light disappear into the Arabian Sea, while the breeze blows softly bringing in the unmistakable aroma of the salt sea. and arrow indicates. You are standing at the western most point of India. The early morning peal of the temple bells eliminates the need for a wake up call and soon we discover the ever-swelling crowd of devotees around the Dwarkadhish temple. Everyone is eager for the darshan of the idol of Lord Krishna. In fact, pilgrims have poured in from all over the country, as Dwarka is one of the four mukti-dhams (abode of salvation). Comparatively Bet Dwarka (30 kilometers off) is a less crowded and more picturesque island with no lesser attractions as this place is acknowledged as the private residence of Krishna and his consorts.

Legend Associated To The City

Legend has it that Krishna shifted to Dwarka when Jarasandh, the Magadhan emperor attacked Mathura a number of times. Dwarka was safe in the middle of the sea and was blessed by the gods who showered it with gifts like Sudharma – a grand assembly hall, Varun – a horse swifter than wind, and Kuber filled the coffers to the brim. However, the grand city was destined to be submerged by the marauding waters of the Arabian Sea.Saurashtra Darshan

The origin of Dwarka is steeped in myths and legends but marine archaeologists are hard at work trying to establish history. Triangular anchors weighing more than 250 kilograms have been salvaged establishing the city’s trade links with Cyprus and other far flung coastal places as early as the Bronze Age. A visit to the nearby Archaeological Survey of India Museum brings to light some interesting finds from the sea.

Having spent considerable time at Dwarka we now move to Porbandar, 120 kilometres southeast. It is a well-known name associated with Gandhiji’s birthplace and the precise spot is marked with a swastika. Adjoining this building is Kirti Mandir, which is a small museum that recreates the life and times of Gandhiji. On the sea front one can admire the Maharaja’s Hazur Palace and watch the cargo ships and fishing boats float by. Night halt is arranged at Toran Tourist Bungalow.

Our next port of call is Somnath. The Chorwad Palace Hotel loomed dramatically silhouetted like a postcard cliché against the setting sun. Though not a part of our itinerary, this hotel was the summer palace of the Junagadh Nawabs, built in 1928. It reflects the colonial style through its huge, high ceiling suites; brass bedsteads and elegant corridors well ventilated by the sea breeze. On reaching Somnath the tour diverts to Sasan Gir and thereby another unspoilt beach at Ahmedpur Mandvi remains off route. The Samudra beach resort at this place offers various water sports facilities like the speedboats and water scooters amidst ethnic surroundings.

The third day excursion is livelier which begins with the Somnath Temple. As the name suggests it was built in gold by the Moon god himself. The lust of gold weighed heavily on the minds of free booters who despoiled it time and again The foundation of the present temple was laid in 1951.Remains of the earlier temple can also be seen at the backyard of the temple. This temple is dedicated to Shiva and it has one of the 12 sacred jyotir lingas making this place a popular pilgrim point. Five kilometers from Somnath is the fishing port of Veraval where dhows are still constructed and used for fishing. Another deserted seaside palace of the Junagadh Nawabs can be seen at Veraval, next to the Toran Tourist Bungalow.

The remaining part of the day is spent in exploring the rich flora and fauna at Sasan Gir, home to the Asian lion. Its other inhabitants include langur, leopard, hyena, sambar, chital, nilgai, chowsingha, chinkara and wild pigs. However tourists are more concerned with the lion, which closely resembles its African cousin. Sighting a lion becomes easier with the assistance of the tracker and guide. Evening is approaching and soon the lions will disappear into the thicket and so do tourists. Lion Safari Lodge and Forest Department Guesthouse are the only two options for the night.

Junagadh The fourth day is spent in exploring Junagadh, a sprawling city at the base of the fabled Mount Girnar, the highest peak in Gujarat. The best place to begin with is the old citadel of Uparkot, which was once the stronghold of the Mauryans, in the third century B.C. Dating back to the days of Ashoka are the rock cut Buddhist caves.

Next to the medley of caves are the two interesting rock cut wells, Adi Chandi Vav and Navghan Kua, deemed to be one of the five precious possessions of Saurashtra.

Other interests include the two cannons, Nilam and Chudanal, which continue to be well positioned on the hill. Cast in Egypt in 1531, they were left behind by the Turkish Admiral who had come to assist the Sultan of Gujarat against their common enemy – the Portuguese. Ashok’s famous Rock Edicts are engraved on the rounded granite boulder, preaching his missionary zeal and the lessons in piety and compassion. Later rulers added two subsequent epigraphs and they record the repairs done to save the adjoining Sudarsana Lake, which has been well looked after by a chain of kings through ages. Mount Girnar is home to 16 Jain temples at different heights, the oldest ones being on the top, namely Naminatha and Mallinatha.

Durbar Hall Museum Until recently walls and gateways surrounded the city of Junagadh but now they have given way to the expansionist urge of the people. Durbar hall Museum is worth a visit for its memorabilia. Junagadh was a princely state and when the Nawab went over to Pakistan his property was attached by the government and so various buildings of the Nawab are now grand government offices. Two of the mausoleums of the Junagadh Nawabs and their families are well worth visiting for its unusual cluster of domes and extraordinary minaret with spiral stairway.

Shatrunjay Temples Later in the afternoon the tour turns to Palitana where there is sufficient time to rest and recuperate for the next day’s uphill affair with Shatrunjay hills – perhaps most dramatic – worth saving as a climax to a holiday. Much before dawn everyone is prepared for an assault of 3282 stone steps rising to 600 meters. The steps are easy and an average person (reasonably fit) can manage the ascent in 75 minutes, but affluent looking visitors find themselves at the centre of a swarm of doli bearers who, for a modest price, will carry the pilgrim or the tourist to the top and down again.

Thousands of years ago, so goes the legend, a Jain priest who could fly and a disciple who could create gold founded a glorious sacred city on the crest of a mountain. They called it Shatrunjay, which was to become the Jain’s holiest pilgrimage with 863 shrines dating back to the 4th century A.D. These shrines are half palaces, half forts with their sculptured shikharas spearing the skyline. The hills are sacred because of the several sages who are believed to have attained Nirvana here and hence called the abode of enlightenment.

Lothal–The Excavated Remains of Harappan Settlement, Before the tour terminates at Ahmedabad, the last point of our interest is Lothal, the excavated remains of an ancient Harappan settlement, rendered almost comprehensible by a good museum. Back to Ahmedabad one can amble leisurely and explore the city. It may take no less than four days to acquaint oneself with the numerous mosques. Not to be missed is the grand Jama Masjid in the heart of the city, Sidi Sayyid’s mosque is noted for its exquisite jali work while Sidi Bashir’s mosque is famous for its shaking minarets, museums especially the Calico Textile Museum and the Vishala Utensils Museum.

Sarkhej is an ideal architectural complex where a number of medieval tombs are located in the vicinity of the Sufi saint who predates the foundation of Ahmedabad. Gandhi Ashram is an excellent photo gallery chronicling Gandhi’s life and has a regular son et lumiere presentation. Once impressive exhibit is the photograph of Gandhi’s earthly possessions – sandals, dhoti, glasses and a food bowl! Ahmedabad’s famous step wells are Dada Harir Ki Vav, 20 kilometers off is the most picturesque Adalaj Vav and still further, at Patan, one is impressed by the ruins of Rani Ki Vav. 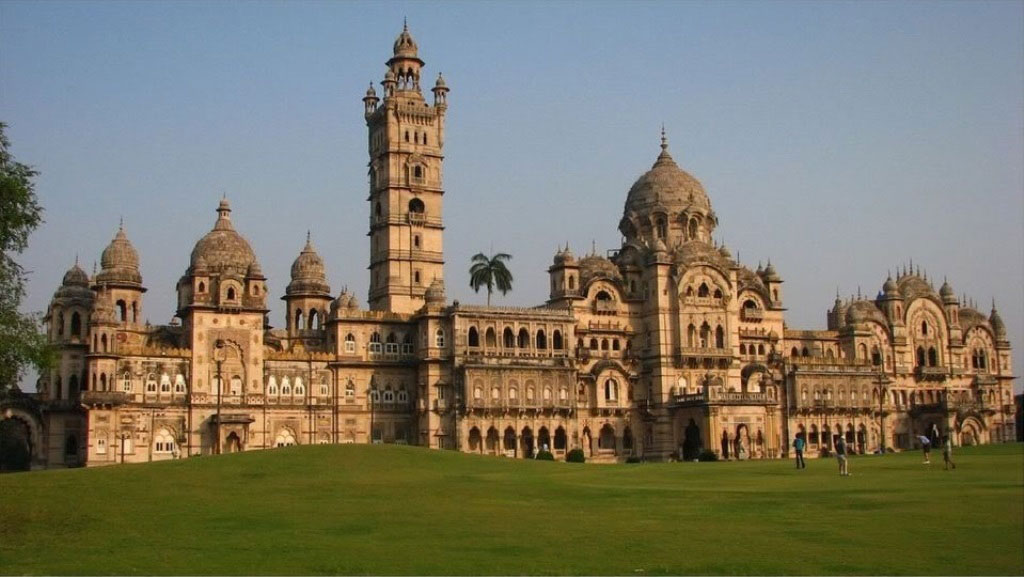 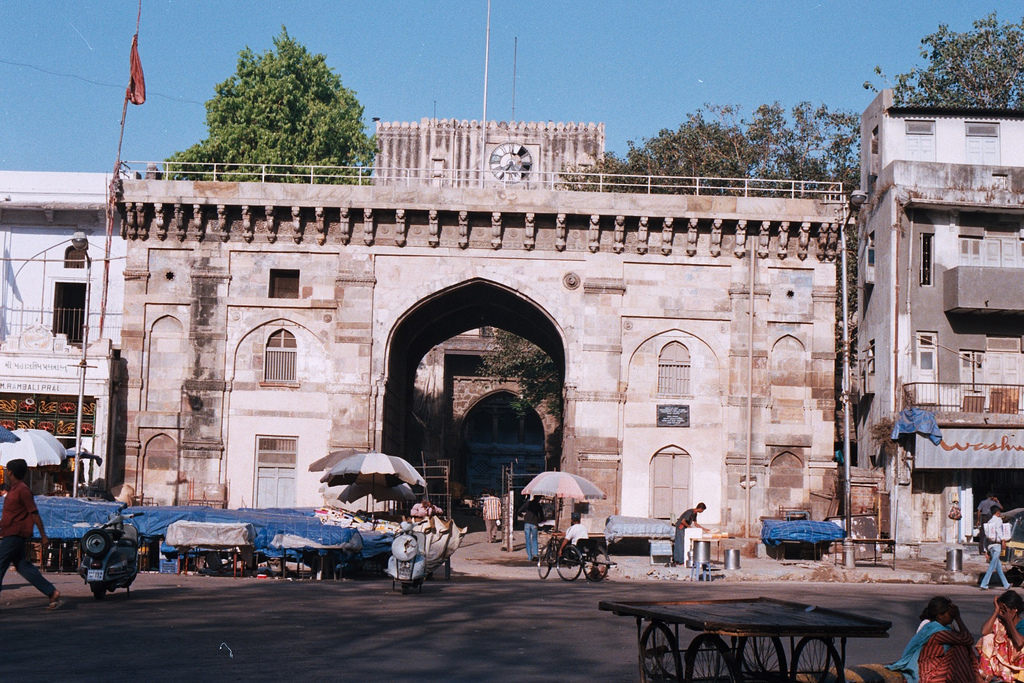 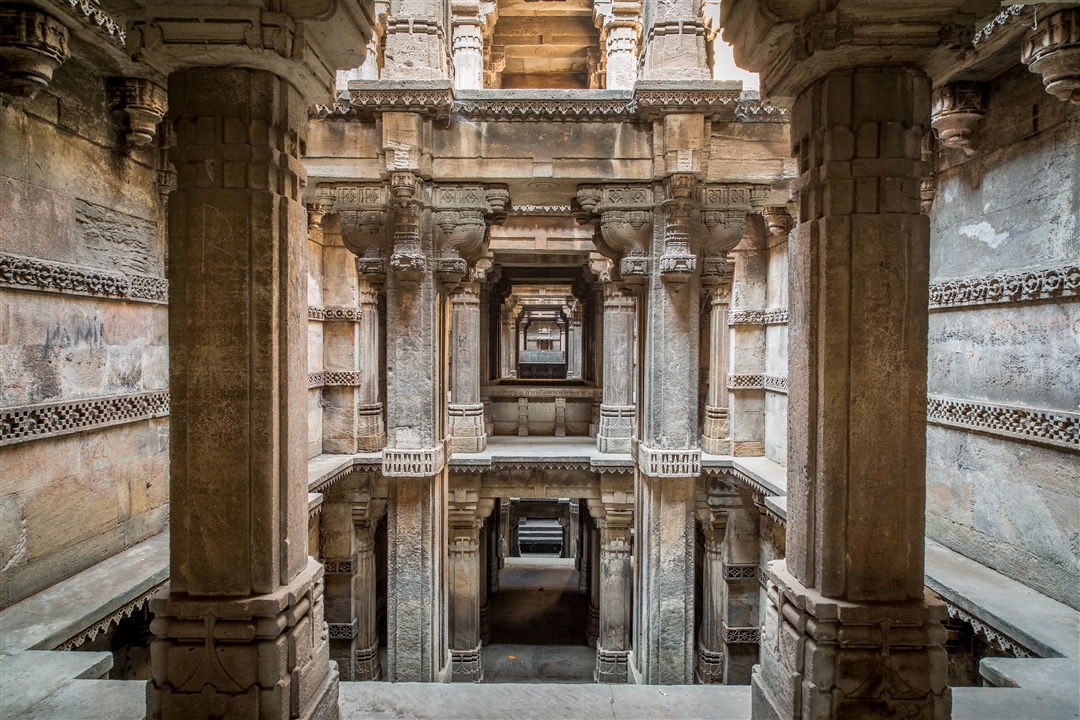