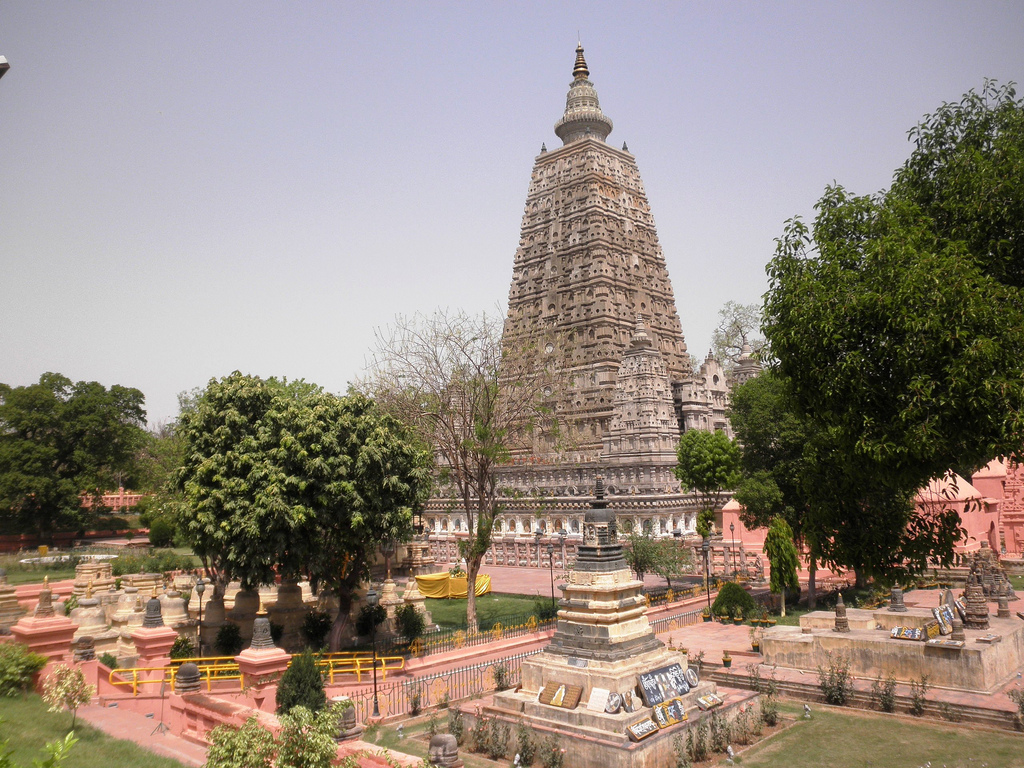 THE BUDDHA: 300 years before Alexandria was founded, about the time that Thales, the most ancient philosopher of Europe was teaching in Greece that water is the origin of all things, the soul of the world; and Zoroaster, in Media or Persia, wasBodhgaya Temple systematizing the fire-worship of the Magi; and Confucius in China, was calling on the teeming multitudes around him to offer to guardian spirits and the manes of their ancestors; and Nebuchadnezzar was setting up his golden image in the plains of Dura; and Daniel was laboring in Babylon to establish the worship of the true God in Judea; a reverend sage who had left a throne for philosophy, was traveling from Bodhgaya to Benares, and from Benares to Kanouj, exhorting the people against theft, falsehood, adultery, killing, and intemperance.

In the year 563 B. C. on the Full Moon Day of Vaisakha in the kingdom of Kapilavastu a young prince was born to King Suddhodana and Queen Mahamaya in the royal Lumbini grove under a Sal Tree. On the fifth day of his birth he was

named ‘Siddhartha’ and on the seventh day his mother expired. Prajapati Gautami, the younger sister of Mahamaya, who also was his step-mother, took care of the young child like any other mother would do.

During the formative years of Prince Siddhartha, he received his early education and was trained in warfare and administration but he was often found immersed in deep – thoughts regarding the suffering and miseries of humanity. He was opposed to exploitation of man by man, inequality, poverty, violence, class and caste system. When he attained the age of sixteen he was married to a very beautiful and charming Princess Yashodhara, daughter of the Koliya King Dandapani of Devadaha.

When Siddhartha was 29 years old Yashodhara gave birth to a beautiful son named Rahula and this he termed as another impediment to keep him attached to worldly life. He left his palace leaving behind his parents, his beautiful wife and the new born Rahula in search of a way that would free mankind or humanity from the cycle of suffering.

Bodhgaya Temple Since then Prince Siddhartha who became a parivrajaka wandered forth to several teachers in search of the Truth that would end the cycle of birth and death. He went to dense forests and dark caves, and met many teachers, practised penance and self- mortification and studied their doctrines and disciplines but all these were not sufficient to satisfy him for what he earnestly sought for and he practised these severe austerities for six long years without taking food nor drink and as a result of which he turned into a mere skeleton.

Realising that the practise of severe austerities would lead him to death he left his friends and came to the east bank of the river Niranjana where he was offered Kheer (rice-pudding = rice cooked with milk and sugar) by Sujata, daughter of the chief of the village Senani. Accepting the dana (offer) of Sujata he crossed the river Niranjana and came to Uruvela on the same day and in the evening he prepared a seat of kusa grass and sat beneath the peepal tree facing eastwards. The Bodhisattva Siddhartha who was determined to reach the truth started his fight against the Mara, the Evil One sitting for meditation with a strong determination (adhitthana) that unless and until he cannot find out the truth he would not get up from the seat, come what may.

THE BUDDHA IMAGE (inside the main Stupa)

The image enshrined in the Mahabodhi temple was considered especially wonderous. Its height of more than two metres makes it the largest surviving seated Buddha image which is created through the black stone, which are painted in gold by the pilgrims. The gilded image of the Buddha seated

cross-legged, with one hand pointing to the earth, i.e. in the attitude of the Bhumisparsa Mudra in which Sakyamuni sat when he attained enlightenment. This sculptural represen-tation of the Buddha is unique with its calm facial expression and superb physical beauty. All the pilgrims from all over the world offer prayers at the feet of the large image of the Buddha installed in the ground floor of the Mahavihara facing east. Its greatBodhgaya Temple size may indicate that it once served as the central image of the Mahabodhi Mahavihara.

This is the most important of all the places for a devout Buddhist. The Jatakas reveal that the Bodhi Tree is an object of veneration as the Buddha himself sanctioned it and is also regarded as a symbolic representation of the Buddha, the fact which is corroborated by sculptural evidence. Thus, some of the earlier representations of the Buddha were shown by substituting the Bodhi Tree which is also called the Peepal Tree (botanical name of which is the Ficus Religiosa). The present tree is probably the fifth succession of the original tree which was earlier destroyed several times by man-made misery and natural calamities. It was here under this tree itself that the Buddha spent the first week in meditation after attaining Enlightenment. He spent seven weeks in seven different places inside the temple complex.

The Vajrasana or the Diamond Throne is the seat of Enlightenment which was made in the 3rd century B.C. by King Asoka the Great. It lies between the Temple and the Bodhi Tree. The Vajrasana is made of red sand stone which is 7 feet 6 inches long, 4 feet 10 inches broad and three feet height where Prince Siddhartha sat to become the Buddha and which is the Holiest of Holy places to the Buddhist of the world. Venerable Ashwaghosa in the Buddhacharita reveals that this place is the Navel of the Earth and the Chinese pilgrim, Fa-Hien’s travellogue also notes that it was this place where all the past Buddhas had attained Enlightenment and where all the future Buddhas must go there in order to achieve the same goal.

After attaining Enlightenment the Buddha spent the second week in Bodhgaya Templemeditation in standing posture gazing at the Bodhi Tree with motionless eyes for one whole week. There is one chaitya (shrine) dedicated to this event and it is located north- east of the Mahabodhi Temple.

After the Supreme Enlightenment the Buddha spent the third week here walking up and down in meditation. On the platform lotuses indicate the places the Buddhas feet rested while walking. It is located adjacent to the north of the Mahabodhi Stupa where a long platform has been constructed to commemorate the great event.

This is a small roofless shrine which is situated in the north-west corner of the Maha Bodhi Temple and is known as Ratanaghara or the Jewel House. The Buddha spent the fourth week here in meditation reflecting on the Patthana or the Law of Dependent Origination. While He sat here in deep contemplation the six rays of blue, yellow, red, white, orange

and a combination of all these colours together forming the sixth colour emanated from His body. The Buddhist flag used in all Buddhist countries is designed with these colours.

The Buddha spent the fifth week in meditation under this tree. The site is situated in front of the Mahabodhi Temple, just a little away from the last step of the eastern gate. Here the Buddha replied to a Brahamana that only by one’s deeds one becomes a perfect Brahmana, and not by birth.

The Buddha spent the sixth week in this place in meditation. This place is situated to the South of the Mahabodhi Temple. While the Buddha was meditating near the lake, there broke out a severe thunder storm. Seeing that the Lord was getting drenched the snake king of the lake called ‘Muchalinda’ came out of his abode and encircling the body of the Lord several times, held his hood over Him as a protection against the violent wind and rain.

It is under this tree that the Buddha spent the seventh week in meditation. The place is situated in the south – east of the Mahabodhi Temple. It is said that two merchants from Burma, Tapassu and Bhallika, while passing that way, offered rice cake and honey to the Lord, and took refuge in the Buddha and the Law ‘Buddham Saranam Gachhami Dhammam Saranam Gachhami’ (they could not take refuge as Sangham Saranam Gachhami, because, Sangha was not founded then).They were the first lay devotees in the Buddhist world. They took some hairs from the Buddha to be worshipped in their country. According to the Burmese tradition the hairs are preserved in the famous Shwedagon Pagoda of Burma and they worship that Pagoda with great reverence and devotion.

We chance upon two Bharhut carvings, one representing a scene of worship of the Bodhi-Tree and the other that of an offshoot or descendant of the same, in both of which the Bodhi-Tree is confronted by an Asokan Pillar Surmounted by the standing figure of an elephant. In both, the stone-pillar is placed on the north-east side of the tree and at a short distance from it. That the spot of the Bodhi-Tree was once marked with an ornamented stone-pillar is equally borne out by an account in the kalingabodhi-Jataka, which mentions eighteen cubits as the probable height of the pillar.

What has befallen the stone-pillar erected by king Asoka at Bodhgaya we cannot say. The pillar is noticed neither by Fa-Hian nor by Huen-tsang. If it had actually been erected by Asoka, its disappearance must have taken place before the visit of the Chinese pilgrims. Historians have many speculations. But so long as the fact of its erection hazard anything beyond this observation that it is rather easier to presume its erection by Asoka than its disappearance caused by some unknown agent. The present pillar has been found at gaya and brought at Buddhagaya few year back.

An important landmark in the history of early Indian art is supplied by the remnants of the square railing that enclosed the early Bodhi shrines of Bodhgaya. Among the donors appear the names of Kurangi and Nagadeva, wives of the kings Indragnimitra and Brahamamitra who have to be assigned to about the first half of the first century B.C. on the whole the carvings on the Bodhgaya rail are in the Bharhut style, but more advanced in technique as well as in visual and, consequently, in plastic effect. The narralive relicts are freed from all unnecessary details and only essential elements being relained to convey the full import of the stooles debicted. The art of Bodhgaya represents a convincing advance on the previous achievements. For the first time the composition begins to vibrate with a charming vitality and the body to pulsate with soft, worm flesh.

FOOT PRINTS OF THE BUDDHA

The foot print is regarded as a semi-iconic in the sense that it is merely suggestive of human figuration. In the Bharhut representation the foot-prints of the Buddha are marked each by a wheel. The wheel represents the ‘Turning of the Wheel of the Law” (Dharmachakra Pavattana) by the Buddha. In the Buddhavamsa the feet of the Buddha are said to have been marked each by the four symbols of vardhamana, wheel (cakra) umbrella (chhatra) and flag (pataka).

The Meditation Park is a new addition in the temple precincts inaugurated by His Holiness the Dalai Lama. It has been constructed by the Forest Department, Govt. of Bihar under OECF scheme. Now Housing and Urban Development Corporation Limited (HUDCO) has prepared a project for the landscaping and construction of Meditation Huts (for meditate here in the sylvan solitude), open congregation halls and pavilions.