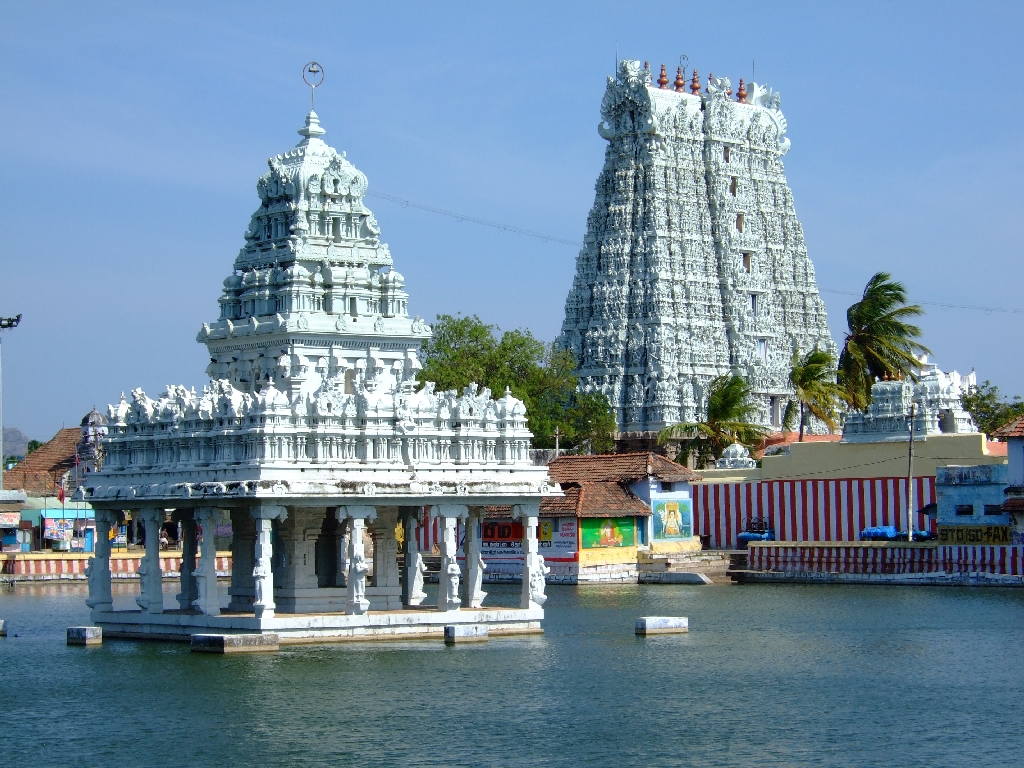 Kanyakumari is located at the southern tip of the Indian subcontinent. The small temple dedicated to Kanyakumari, or the youthful form of the primeval energy Shakti (Mother Goddess) is located on the seashore, in the town known byKanyakumari Temples the same name. Kanyakumari was referred to by the British as Cape Commorin.

Kanyakumari represents the site where the spiritual leader Swami Vivekananda spent days in meditation upon a rock off of the coast. A memorial built in his honor is accessible via ferry. There is also a recently built memorial to Tiruvalluvar, the author of the philosophical work Tirukkural – a treatise on the Indian way of life.

The Kanyakumari temple is an ancient one and has been mentioned in the Ramayana, Mahabharata, and the Sangam works Manimekalai and Puranaanooru. It is believed that the image of Kanyakumari was installed and worshipped by

Parasurama, who is credited with reclaiming Kerala from the ocean, and building several shrines.

Legend has it that the demon Baanaasuran wreaked havoc on the inhabitants of this world, and that Mahavishnu requested the Gods and the humans to request primeval energy Paraasakthi to vanquish the demon. Answering the prayers of the oppressed, Shakti appeared as a young virgin girl at Kanyakumari and commenced penance with the desire of marrying Shiva at Suchindram.

Legend has it that the celestial Sage Narada, fixed the midnight hour as the auspicious time for the wedding. When Shiva’s procession reached a site by name Vazhukkumpaarai, a rooster crowed, hearlding daybreak, and that Shiva assuming that the auspicious hour was past, returned to Suchindram. The disappointed Goddess decided to spend her life in Kanyakumari as a virgin, and that all the food prepared for the wedding was laid waste and that it turned into the colored sand seen on the southern shores of the subcontinent.

Kanyakumari TemplesThe demon Banaasuran upon hearing of Shakti’s story proceeded to Kanyakumari to win her hand in marriage by force, and this led to a fierce battle in which he was slain by her.

The temple: The black stone image of Kanyakumari in the sanctum bearing a garland is an enchanting one. Of particular significance is the glittering nose ring that is visible from a distance. Legend has it that the light emanating from this nose ring misguided arriving ships and caused them to crash onto the rocky coast. There is a door now, to the east of the shrine which is opened only five times a year. There are also shrines to Vijayasundari and Balasundari, friends and playmates of the Goddess in her youthful form. There are a total of 11 theerthams associated with the temple in the ocean surrounding the area. The confluence of the seas, at the southern tip of the subcontinent has been held sacred for centuries.

Festivals: Worship services are carried out here, throughout the day, in a manner similar to that in Keralite temples. It must be remembered that Kanyakaumari was a part of the erstwhile Travancore kingdom.

The Vaisakha festival is celebrated in the tamil month of Vaikasi where an image of the goddess is taken around town in procession on various mounts. The car festival, the Aaraatu (when the eastern door to the shrine is opened) and the float festival here are of significance.

The eastern door is opened also on new moon days in the months of Thai, Aadi (Capricorn and Cancer), during Navaratri and in the month of Kaartikai.Kanyakumari Temples

An image of the deity is held in worship at the Navaratri mandapam throughout the duration of Navaratri, and processions mark the festive celebrations on each of the nine nights.

The destruction of Baanasuran is enacted on Vijaya Dasami, the concluding day of the Navaratri festival, where an image of the deity is taken in procession on a horse mount to a nearby village – Mahadanapuram.