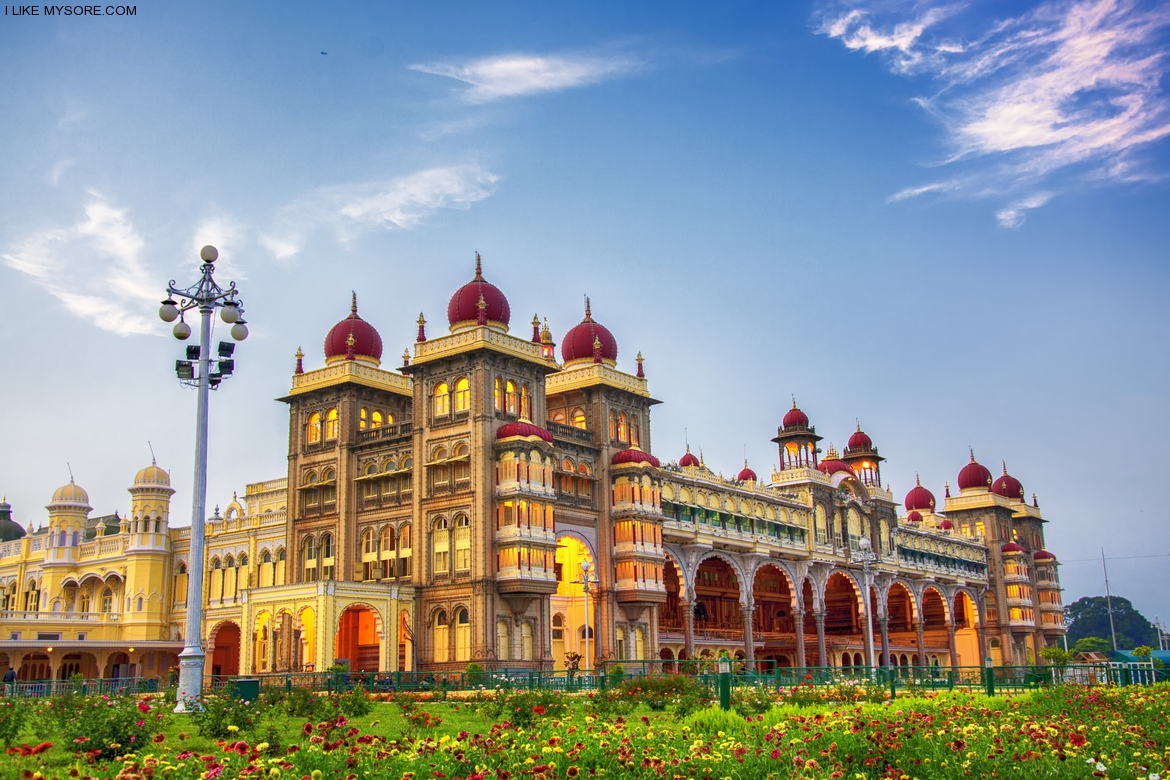 Mysore Palace: Mysore is a city of palaces, but the most magnificent of them all is the Mysore Palace sometimes known as the Main Palace as well. One of the most unforgettable images of the city is the image of the illuminated Mysore Palace againstMysore Palace the dark black sky. It takes ninety seven thousand light bulbs to produce this enchanting image of the Palace. The Palace is situated in the middle of the city and is a reminder of the grandeur of a bygone era and is today an invaluable national treasure.

The Palace that stands today is the fourth one to be built in the same site. When the capital was shifted back to Mysore from Srirangapatnam, after Tippu Sultan’s death, the Palace was hastily rebuilt with wood and mud, in a Hindu style. The Royal family moved into it in 1801. But this Palace was burnt down in a fire that broke out during the wedding of the oldest daughter of Maharaja Chamaraja Wodeyar in 1897. The

reconstruction of the Palace was undertaken immediately and the Royal family moved to Jaganmohan Palace. The English architect Henry Irwin designed the new Palace and it was completed in 1912 at a cost of about Rs 41 lakhs.

The Amba Vilasa Palace as the Mysore Palace is known, is an excellent combination of Dravidian, Indo-Saracenic, Oriental and Roman styles of architecture. The Maharaja’s Palace is a beautiful three storied stone building of fine gray granite and rich pink marble domes, overlooking this structure is a five-storied 145 foot tower whose domes are gilded in gold. One enters the Palace through the Gombe Thotti or the Doll’s Pavilion; this is a pavilion of traditional dolls from the nineteenth and early twentieth centuries. This collection also has a wooden elephant howdah (structure for carrying people on the elephant) that is decorated with 84 kilograms of gold.

There are seven canons in front of the Gombe Thotti and are used to this day to mark the beginning and the end of the Dasara festivities every year. Ahead of this is the elephant gate, this gate in the main entrance to the center of Mysore Palacethe palace. The Kalyana Mantapa or marriage pavilion has a central octagonal gabled roof that is covered with stained glass. This pavilion is in the south of the building. The floor of the Kalyana Mantapa has beautiful geometrical patterns created by using shining glazed tiles imported from Britain. The Ambavilasa or Diwan-e-Khas, is the hall used by the emperor for private audience.

This room is one of the most ornate rooms in the Palace and is located on the first floor, facing east. The Diwan-e-Aam is on the same floor facing south. The Palace has a number of visually delightful rooms like the portrait gallery, the royal armory, collections of costumes and jewellery, delicately

carved doors of mahogany and solid silver, graceful chandeliers, decorative stained glass ceilings, ornamental frescoes. During the Dasara the Royal throne made of 200kgs of pure gold is displayed. It is claimed that the ancestry of the throne can be traced to the Pandavas. On the walls of the Palace the Dasara processions have been painted in such a way that, no matter where and how you stand the procession seems to be heading towards you.

There are twelve temples inside the Palace complex dating from the fourteenth to the twentieth centuries and have varying architectural styles. The Palace is set in a carefully laid out gardens. One can visit the Palace of all days of the week between 10am and 5.30pm. The Palace is illuminated on Sundays, national holidays and state festivals between 7.00pm and 8.00pm and during the Dasara festivities from 7pm to 9pm. You can hire a Mysore Palace Board certified guide for a nominal fee and he will take you on a guided tour of the whole Palace. 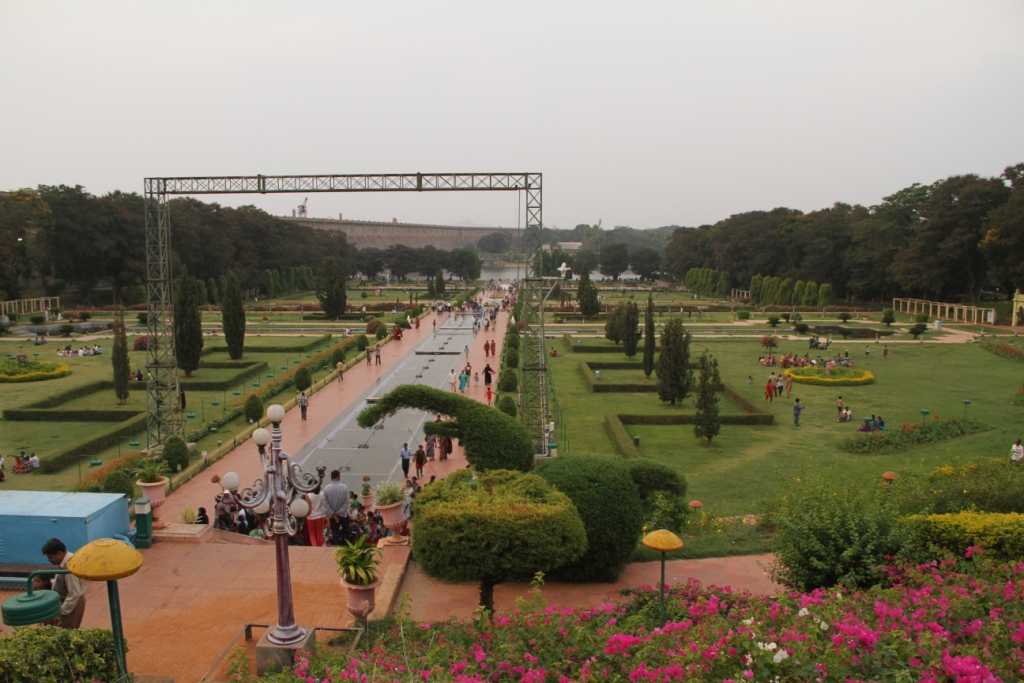 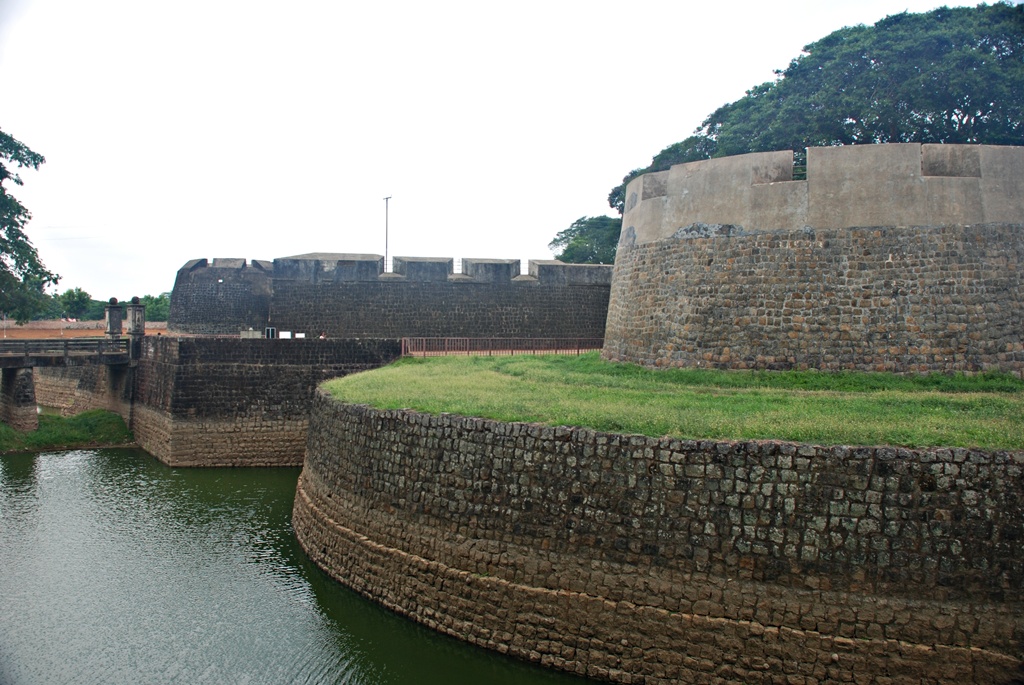