Park At A Glance

The Kanha National Park, in Madhya Pradesh, forms the core of the Kanha Tiger Reserve created in 1974, under Project tiger. Stretchi8ng over 940sq km, the vegetation, chiefly made of Sal and bamboo forests, this park, is the sole habitat of the rare hard ground barasingha.

Kanha National Park in the Mandla District spreads over 1,945 sq. km of dense Sal forests, interspersed with extensive meadows and trees and clumps of wild bamboo. This area known as Kipling country’ is where all the jungle books of Rudyard Kipling were conceived.

The forests of the Banjar valley and Halon valley, respectively forming Kanha’s western and eastern halves, had even, at the turn of the century, been famous for their deer and tiger

population. By a special statute in 1955, Kanha National Park came into being. Since then, a string of stringent conservation programmers have been launched, for the overall protection of the park’s fauna and flora. It is o9ne of the most well-maintained National Parks in Asia, and a major attraction for avid wildlife buffs all over the word.

Kanha boasts of about 22 species of mammals. Some of the i8nhabitants of this park are the gaur. The largest of the world’s cattle; the sambar, the largest Indian deer; and the Chausingha, the only four-horned antelopein the world. Other frequent visitors include the Nilgai antelope, the sloth bear, the dhole, or Indian wild dog, and an occasional panther. Some 200 species of birds inhabit, hawk eagle, and the red-wattled lapwing. Shravantal is an old, earthen bound tank in the central Kanha meadows, which happens to be an important watering hole, for a large number of water fowl in winter. Bamni Dadar, known as Sunset Point, is the most beautiful section of the Park and the view of the sunset from this spot is absolutely mesmerising. Quite a few animals can be sighted around this area which include the sambar, gaur, the four horned antelope and the barking deer. The barasingha is undoubtedly, the jewel of Kanha, and drastic steps have been taken to rescue it from complete extinction. The enlargement of the grasslands, through village reallocation, has been responsible for this impressive achievement. Barasinghas exist almost totally on grass, and tall grass meadows are essential for their security. At the height of winter, between December and January, falls the rutting season of these animals, and huge

groups can be easily spotted in the Kanha and Sonph meadows. A small, but significant number of blackbucks also inhabit the central Kanha meadow.

But for all the astonishing diversity in its wildlife population, Kanha is best known as the habitat of the tiger. Sighting and photographing this magnificent animal from elephant back, is an unforgettable experience.

MPSTDC jeeps are available on hire for touring the park. For tiger tracking, elephants are used. Forest Department guides accompany visitors around the park on circuits, which enable the latter to view a good cross-section of the abundant wildlife. Best period to Visit

The Park is closed from July 1 to October 31, because of the heavy monsoon. The ideal time to visit Kanha would be the period between February and June. A stay of at least 3 Nights is recommended, in order, to get a really good sighting of Kanha’s more elusive animals.

About Kanha National Park: The lush sal and bamboo forests, grassy meadows and ravines of

Kanha provided inspiration to Rudyard Kipling for his famous novel “The Jungle Book”. Kanha National Park located in the Mandla district of Madhya Pradesh came into being in 1955 and forms the core of the Kanha Tiger Reserve, created in 1974 under Project Tiger. The Park’s landmark achievement is the preservation of the rare hardground Swamp Deer (Barasingha), saving it from near extinction. Stringent conservation programs for the overall protection of the Park’s fauna and flora, makes Kanha one of the most well maintained National Parks in Asia.

A heightened attraction within the Park is Bamni Dadar. Popularly known as the Sunset Point, it offers the most awe-inspiring backdrop of the setting sun against grazing Sambhars and Gaurs, magnifying the natural splendor of the area. Aside from its diverse wildlife and bird population, the frequent sightings of Tigers roaming in the wild at Kanha Wildlife Sanctuary remain the most popular draw.

If one animal species were to represent Kanha, it would probably be the barasingha, or the swamp deer. The barasinghas at Kanha are unique, being the hard ground variety, which populate the large open tracts of grass amidst the forests of teak and bamboo. Twenty years ago, the Barasingha was faced with extinction but some desperate measures which included the fencing-off of some animals helped save them and again the air in Kanha bugled with their rutting calls.

Safaris: Jeep Safari and Elephant Safari are the two options for spotting wild animals in the park. The safaris can be enjoyed any time during the day while the best time for animal spotting is during early morning or late evening. The safari timings generally are 6 AM to 12 Noon and 3 to 5:30 PM.

While it is essential to take along a park guide on a jeep safari, an elephant safari is the better option where the mahout or the elephant driver will be your companion and guide. To get on an Elephant ride, one has to book a seat for the Tiger show, offered in the mornings.

Other Attractions in Kanha National Park

Kanha Museum: You can top your visit to the Kanha National Park by visiting the Kanha Museum, situated inside the park. The museum provides useful information about varied topics including the topography, park maps, pug marks of various animals etc, which can enhance your experience of visiting the park.

Raja Rani: Near the visitor centre one can see the stumps of two giant sal trees that are worshipped daily in the forests. Known as Raja Rani, these trees once lived in the Kanha National Park. 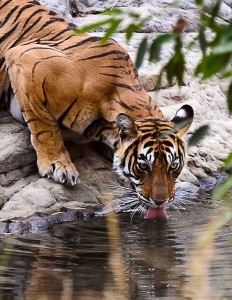 By Road: There are regular to and fro bus services available from Jabalpur to Kanha. Cars can be hired from all the nearby towns to reach Kanha, the choice should however be an all terrain 4 wheel petrol vehicle. The drive from Nagpur to Kisli takes around 6 hours by car. The travel up to Seoni (130 km) on the Jabalpur National Highway is a smooth drive. From Seoni, take a right turn to Keolari, Nainpur and Chiraidongri to finally reach the Kisli gate of the park. Alternately, to reach the Mukki gate, divert away from Seoni through Balaghat and Boihar. Another option is the drive from Jabalpur (well connected by train to major Indian cities) via Tikaria and Mandla. To reach the park from Nagpur, take the NH6 to Bhandara. From there state roads lead to Kanha (Mukki) via Balaghat and Baihar.

Local Transport: The Madhya Pradesh State Tourism Development Corporation (MPSTDC) operates a Jeep Service for visitors to go around in the park. Advance bookings can be made through the Manager, MPSTDC, Log huts, Kisli. Wild Chalet Resorts at Village Mocha, Kanha can also arrange for local sightseeing.